The wonders of Velcro!

Last week I got snagged on a pin while turning a quilt, I bled like a stuck pig (believe it or not...it's still sore a week later) so, I've eventually decided to go with velcro for my leaders......I had velcro leaders on my previous frame so I am familiar with it, if I do decide later to go with zippers I can just rip off the velcro and haven't really lost much......

I intended to apply the velcro only to the take-up roller today but I found it so easy that I did the backing roller too........I usually float my quilt tops so there is no real need to do the top roller....if in the future I need to attach a top to the roller I can pin or make a mini leader quite quickly.

I still had some mini leaders from my previous frame, they are only about 6 inches deep but I needed to adjust them....I wanted the velcro on the minis to be the female (soft and fuzzy) kind so that it wouldn't catch on your clothing (and everything else) while stitching on the backing at the DSM.  So today I adjusted the largest set from my Inspira frame which was a 10ft frame (so they are a little short) for my new 12 ft frame but I can make longer ones later...I might as well have made new from scratch as I also took off the turned hem and finished it on the serger.   I have another two sets of shorter mini leaders, I'll get around to sorting those in time too...that's the beauty of the velcro system you can have different sized leaders that you can whip on and rip off to suit the situation...if you are in the middle of a quilt and want to do a little practice for a block you can quickly put on a practice sandwich. 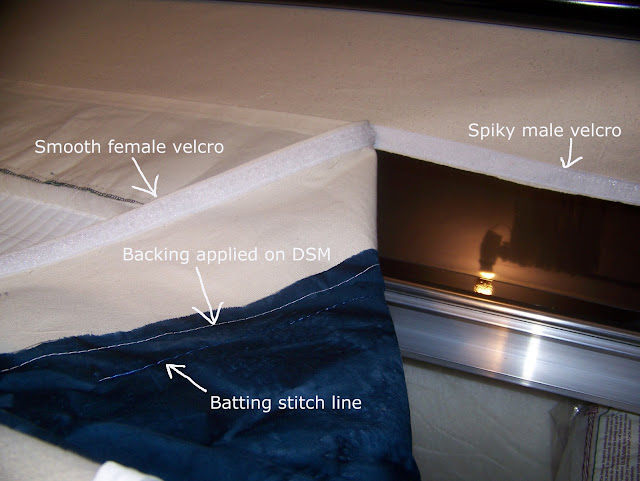 To sew on the mini leaders I just use ordinary sewing thread...what ever is on the DSM at the time and the biggest stitch that my machine will do and then just rip off the leaders when done!

Update......
After using the mini leaders for a week or so...I think they would be better at least 12 inches deep then the velcro won't catch on the needle plate or thread cutter (if still in place) when you move the head of the machine within your quilting space....just a thought!

So as I said 'I didn't seem to do much today but I've achieved a lot!


This velcro system is a lot cheaper than zippers too!