Flowering at the moment here in Scotland.... 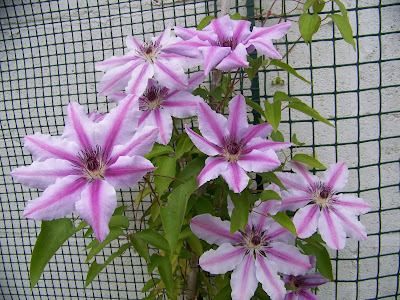 Not sure of the name of this one below...will find out!

I think it's 'Corona', but if any of you clematis lovers out there know better please let me know! 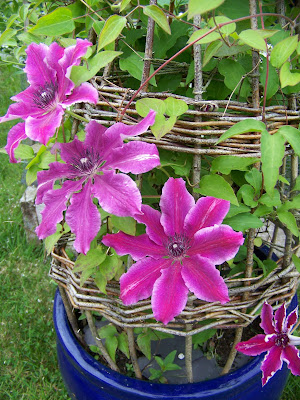 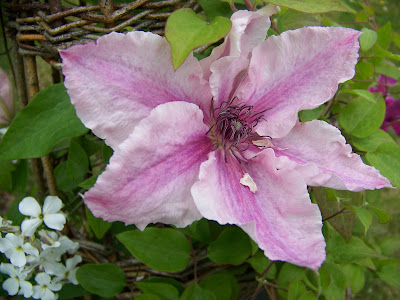 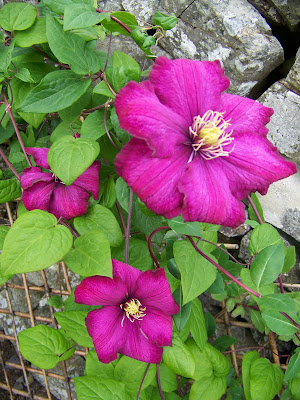 So...how do you get your kicks?

Maybe you like to get up at dawn when the birds awake? Not me!

Maybe you like to drive fast cars? Hmmm, no not really!

Some people like to lie on a beach in the sun? No, I get prickly heat and usually mosquetos find me attractive!

Although I hate really early mornings, today we got up at 4.30am to get the horses in and go to Selkirk, (next door town) and ride their 'Ride Out'! I can't even really say that I like fast horses, although my horse thinks she is fast she's not really but she is forward and wants to go...I like a horse that I feel safe on especially galloping over the Scottish hills, but you know it's a totally different situation when you are riding with 300/400 horses!
After the battle of Flodden in 1513 only one man returned to Selkirk... Fletcher was the only survivor...a Selkirk man born and bred is chosen to be Standard Bearer to represent Fletcher..The Selkirk Common Riding lasts only one day, it's a safer slower ride with lots of steep hills and valleys and at the end a 'chase' up the 'Toll' through the crowds!

This is a short video from 2009..maybe I'll replace it with a version from this year when it becomes available!

Then it's over and we are home for lunch and maybe a short nap...!!!
No comments:

I love the finger grips and the resistance stip on the back..very good design and very good quality! 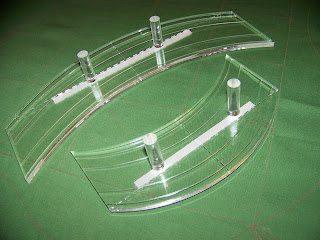 The Continous Curve Rulers will soon be a new addition to Carol's line of the much appreciated 'Fine Line Rulers'..and there are more exciting things in the pipeline so why not take a stroll over to Carols website! 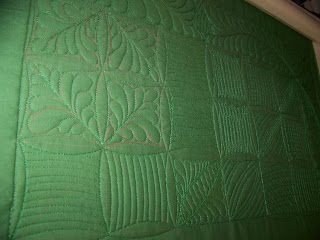 I am new to ruler work so there are quite a few wobbly bits, but it's just a practice piece! You may also notice the red markings...I am trying out the Frixion pen by Pilot as a marker..on paper the marks are supposed to rub out with the plastic rubber leaving no debris...the heat from the rubbing makes the ink disappear.
On fabric you can also use the plastic eraser but I tried an iron and the marks faded...I will try a hairdryer when I have finished with the grid on this sandwich and will let you know what I think!!

Updated 9/7/10....when I  applied a hot hairdyer to the red 'pilot frixion' pen marks the marks faded to a very faint line, if this line is under your stitching it will never be seen.......left me wondering if the marks would come back if the fabric sandwich was left somewhere cold...watch this space and I'll let you know?????

Updated 20/07/10.....I put this practice sandwich inside two plastic carrier bags and put it in the freezer and then forgot about it for three or four days......the red frixion pen marks ( previously faded) had come back with the cold... so that is no good at all!  Well, here in my house anyways, my bedrooms can be pretty cold in winter, although not as cold as a freezer but pretty close...lol...!!!
2 comments:

At last the day has dawned...Common Riding Morning!

The Cornet collects the 1514  flag from the Town Hall and carries it along the High Street to Backdamgate and the awaiting horses...all the horses (335) and male riders (no females today) then leave for a procession around the town...here they are leaving through The Vennel....

After a short ride around the town the cavalcade proceed to Haggisha and the Acting Father (Gordon Jackson), followed by the married men Chase up the Nipknowes, after a slight pause they are followed by The Cornet, (Greg Easton), his Right Hand Man, (Jaimie Richardson), his Left Hand Man (Ben Graham) and then all the single men and boys!


As usual there are many other activies happening today, a visit to the hut with speeches and songs, the cutting of the sod on the extremity of the town boundary, all the horses arrive at the race course and follow the Cornet in a  lap of honour around the race course. There's horse racing, childrens racing, band playing and one huge picnic with not a little alcoholic beverage!
When the cornet leaves at 4pm with his mounted supporters, The Cornet goes to the river to dip the flag in the Cobble Pool before returning it to the Town Hall.
In the Evening the Common Riding Dinner is followed by the Common Riding Ball, at sunrise The Cornet's party visit The Mote and sing Teribus on it's summit, after dancing the final reel at Tower Knowe all are allowed to go home and sleep before returning in the morning to do it all again allbeit on a much smaller scale!
No comments: 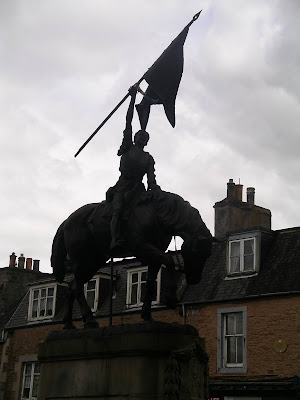 Well, there are lots of other events throughout the Hawick Common Riding festivities, there's the Thursday Night Chase, when the Cornet and his followers ride to St Leonards to order the 'Curds and Cream' ready for the Common Riding Day!

On the Sunday before Common Riding Day 'Exhibition Sunday', there's the Kirkin' of the Cornet with the Cornets Chuch Parade along the Highstreet, then the 'Inspection' of the Race Course ready for next Thursday, Friday's and Saturday's big events!

Then on Monday, Tuesday and Wednesday there are morning chases leaving at 6am coming back into town at 8am.The Chases represent the capture of the English Flag!

There is another 'Chase' on the Thurday morning when only Men are allowed to follow the Cornet to St Leonards where the speeches and songs in the 'hut' are accompanied by rum and milk, (women are never allowed in the hut, this is a very hallowed place).
The School Children of the Parish love the Thursday before Common Riding Friday as the Cornet and Right and Left Hand Men with their Lasses, and the Acting Father and Mother visit all the schools in the town and ask the Headmasters to allow the Children to have a day off school to celebrate the Common Riding and indeed they are allowed to leave school on the Thursday Morning and not return until the following Monday!

On Thursday night its the 'Colour Bussing' ceremony, where the 'Cornets Lass' ties the blue and gold ribbons to the Hawick Flag declaring it 'well and truely bussed'. The Cornet climbs a ladder to tie blue and gold ribbons to the flag on 'The Horse' statue on the high Street...he is surrounded by crowds and crowds of on lookers cheering him along...another unbelievable sight to see!!

The songs and ceremonies of the Common Riding re-live the story of the victory at Hornshole.

There are lots of events and activities both public and private going on in Hawick over the Common Riding, I have only described a few here, there are many many others!
No comments:

"Never cast a clout till May is Out"!

Well most people believe that to be the month of May but in actual fact the proverb relates to the 'May Flower' which is the flower of the Hawthorn tree....it's now in full bloom so I guess it's safe to take of those thermals! When I was young it was a 'liberty bodice'...who else remembers a 'liberty bodice'!.

The flowers on the Hawthorn tree don't last long but are still quite beautiful in their own way and have that intriguing musky kind of smell???? 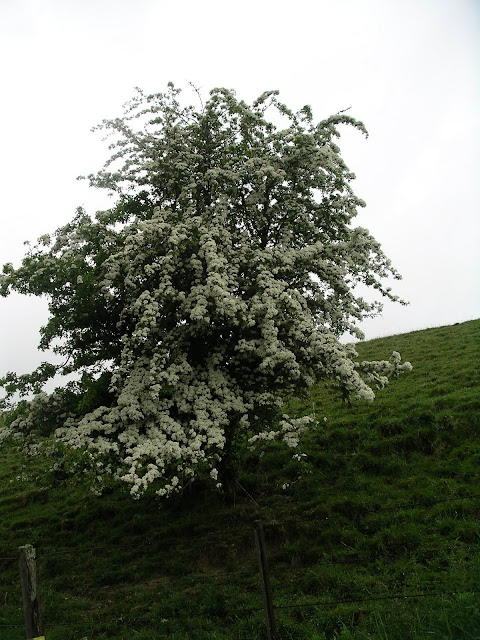 This is the last of the 'Ride Outs' for Hawick Common Riding but not the end of the festivities, they will continue until next weekend!
But today we rode to Denholm.....240 horses and riders.....the weather was glorious, extremely hot for the horses and riders, but a wonderful day for a picnic and everyone waiting in Denholm!

We headed out towards Bonchester Bridge as we had done on the first Ride Out but then turned towards Ruberslaw...here you can see Ruberslaw in the background behind Robin and Dibbley..... 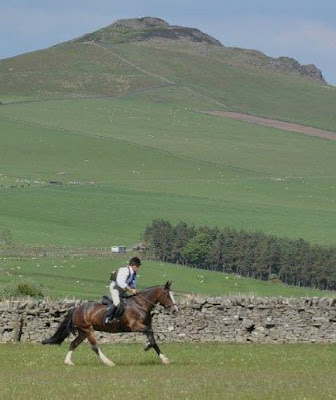 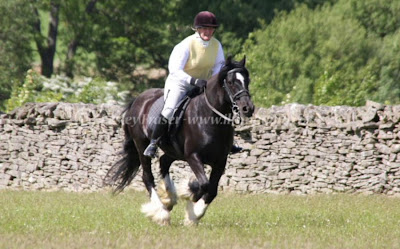 Guess where we were going next? 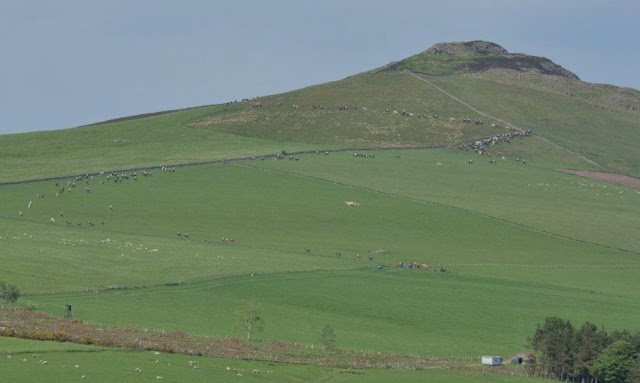 Lots of difficult gateways and tricky paths, we all made it eventually...but not right to the top....around the other side as we started to decend we travelled through a small wooded area with fallen trees made into jumps for the horses...we could here the wooping and hollering of the young boys and Men as they travelled through in front of us...it was obvious that someone had fallen but no one was hurt and it was taken in fun...then it was our turn....Robin went first and Dibbley cleared all four jumps...then Me and Bess jumped the first three clear, but pulled out of the fourth as it was just a bit too big for Bess after that big climb, still Bess did very well for a small cob!!!
From the top of the hill, my what a view, we could see the village green covered in cars, then we travelled back down the ancient volcano.  The crowds of people lining the streets was unbelievable, very humbleing....when I say thousands...well they were ten deep lining the streets all the way around the square and down to the river where the horses rested, drank water, maybe had a roll and ate grass while we met up with friends and family and again enjoyed our picnic!! 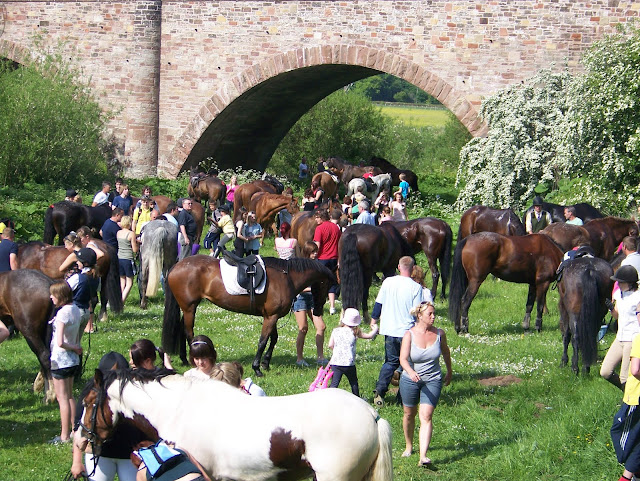 Just look at the crowds waiting to cheer everyone back into Hawick, the Fife and Drums lead us in.... 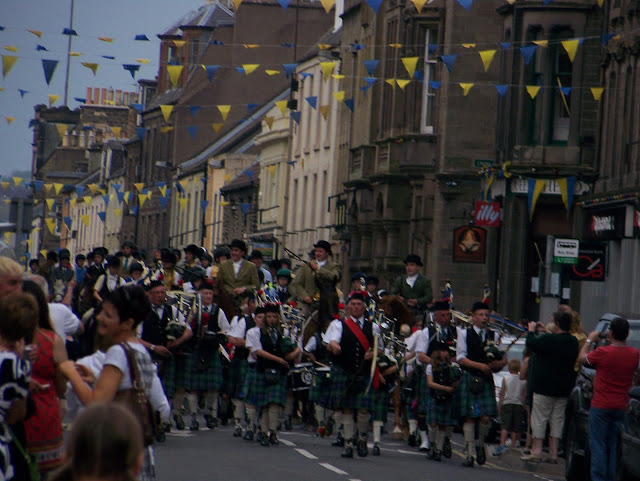 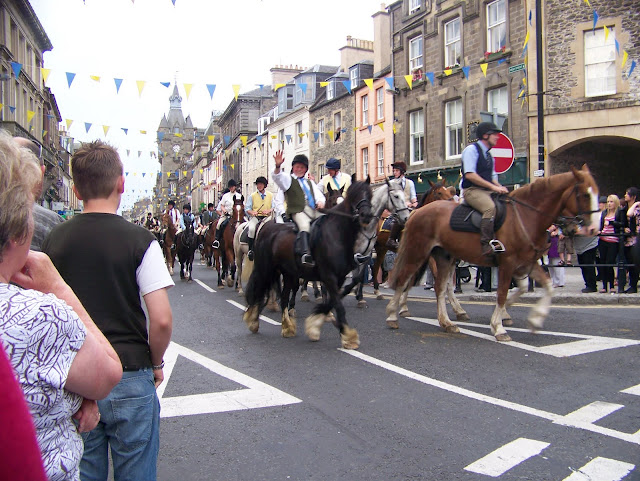 Then as usual, the Cornet, Right and Left Hand Man and the Acting Father carry the children aloft back around onto the highstreet and again sing the Hawick song on the Tower steps.... 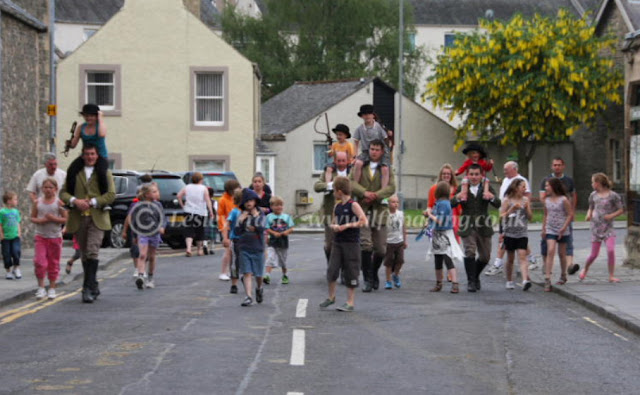