I was contacted by Maggie who lives in Australia with a rush job to quilt this fantastic quilt that was to be presented to Gary Hogg her nephew and his 'Lass.' Gary has been a principle in The Jedhart Festival for the past three years so this year was his last year, I hear that they were both delighted with their gift.

The quilt is made from a layer cake and the colours just happen to be those of Jedburgh town. I quilted it with a navy thread and an edge to edge design named 'Surf.'
As I was recuperating after having had my appendix removed in June, Maggie got the added bonus of having a full binding treatment done on the quilt so that it could be gifted before Maggie and her husband flew back to Australia. An international effort, pieced in Australia by a Scott and quilted in Scotland by an English quilter

Now I can say I've quilted for customers in England, Scotland, Ireland, Wales, Southern Ireland, Belgium, France, Netherlands, USA and Australia, who would have thought it?

And guess what, I forgot to take photos of this quilt, so thank you Maggie for fulfilling my request, it's wonderful to also see your Nephew and his Lass with their quilt.... 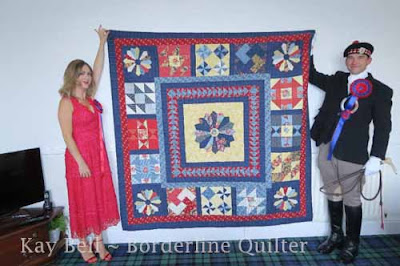 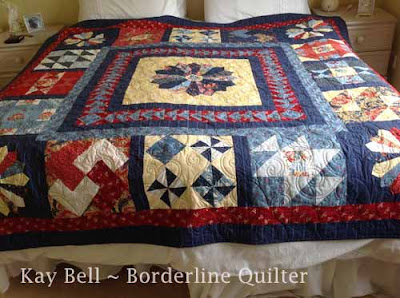