How big is your machine?

That's a question that many Longarm Quilter's get asked....I think what's meant is 'what is the biggest quilt you can quilt on your longarm?'
Well, the frame on which my longarm machine glides has 12 ft rails so that means that one side of the quilt could comfortably be up to 130 inches (maybe slightly bigger), but the other measurement can be longer as the quilt is wound on the rails as you advance.....I don't know who would want a quilt bigger than 130" x 130".....but it could be done!


But today's more relevant question is 'how many quilts can you quilt on your longarm....lol...?

Answer for today is 'Eleven!' 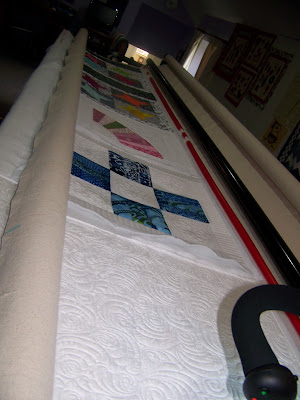 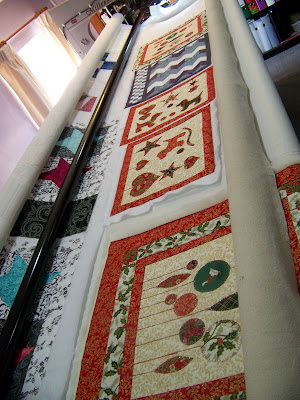 And that's another six on the second row.....(two Christmas wallhangings, two Christmas table mats, a cushion top and another white cushion back at the far end). Of course if my piece of backing fabric had been a little bit bigger, I could have also quilted another cushion back to finish off .....maybe next time!

I'm having a bit of a tidy up using up some orphan blocks that you may recognise and finishing up some small projects, some of which belong to my GKids.  These small quilts are all loaded on the same cream backing fabric although I am using some smaller offcuts of batting that have been lying around waiting for just the right project.

It takes a while to load all of those little quilts but it would have taken alot longer if they were all on seperate backings.